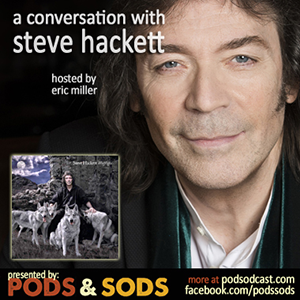 Steve Hackett joins Eric in conversation. We talk about his early days with his musical family and connecting with Genesis.  What was it like during the recording of Lamb Lies Down On Broadway and what are some of the inspirations behind some of those classic Genesis songs?  We cover stories of his early and continued solo records and touring including Wolflight and Genesis Revisited.  We talk about some of his musical brothers outside of Genesis – Brian May, Chris Squire, Steven Wilson & more.  His classical influences, what’s it like being the flag-bearer of Genesis in terms of live performance in 2015 and so much more.
DOWNLOAD HERE (right click to save)