Songs of The Knight – Enough Is Enough 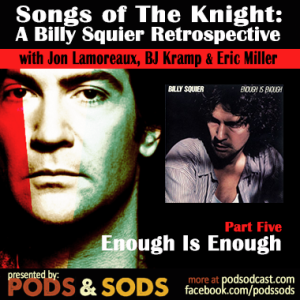 What do you do to follow up a disastrous video that, although charted quite successfully, negatively impacted your career trajectory? How about when you’re stuck between label pressure in a changing landscape of hair metal and keyboard oriented rock?  Well, if you’re Billy Squier you toil away on an album until you come up with Enough Is Enough. In this episode of the sidecast series, Songs of The Knight: A Billy Squier Retrospective, we take a detailed look at 1986’s Enough Is Enough. Joined by podcast friends Jon Lamoreaux of The Hustle Podcast and BJ Kramp of the Rock And/Or Roll Podcast, Eric and his co-hosts go in-depth and track by track with Billy’s fifth album.  We get into the featured duet with Freddie Mercury, Love Is The Hero, the co-write he did with Freddie Lady With A Tenor Sax, our thoughts on the album cover, the fine art of singing Whoo-hooo, what challenges did Billy face at this time in his career, his guitar playing, his singing, his adventurous songwriting, and much more. Finally we wrap this episode in the series with Jon’s personal ranking of Billy Squier’s discography.