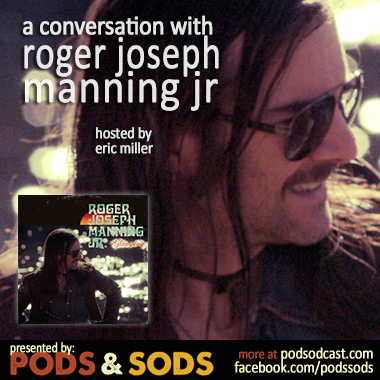 Roger Joseph Manning Jr of Jellyfish, Imperial Drag, The Moog Cookbook, and Beck’s band (among many others) joins Eric in conversation to discuss his early days discovering drums and switching to keyboards, what the vision and strengths were of Jellyfish and why he thinks the music has resonated for so many years, what were the plans for the third album that never became a reality, how he shifted from Jellyfish to The Moog Cookbook and Imperial Drag, his collection of vintage instruments, his journey as a freelance musician working with all sorts of artists including David Bowie and Roger Waters, what it was like working with Roger Waters in the studio, the creative process behind his new EP Glamping, connecting with Chris Price, the project he’s currently working on with Eric Dover and Tim Smith, what’s next now that he’s active on PledgeMusic, and much more!

BONUS – This episode also includes an interview from March 1994, about two weeks before Jellyfish officially broke up. Possibly the last interview Roger did as a member of Jellyfish. It features a dopey, young Eric Miller completely devoid of interviewing skills, but it is interesting for historical purposes.