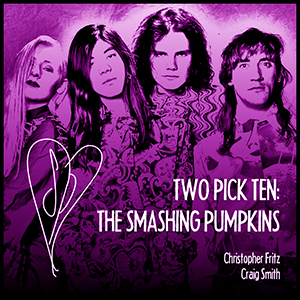 On the heels of March’s Two Pick Ten debut, Christopher Fritz returns to the Pods & Sods Network to discuss a band that he and Craig worshipped throughout the latter half of the nineties: Smashing Pumpkins. Given the difficulty in narrowing down such a broad (and let’s face it, genius) body of work required some rules to be put in place, so the goal each take on is to pick their respective ten non-single SP tracks, with some backups in case of overlap. No worries though, the episode opens with their five essential singles picks, just so some great songs that would have been lost could get a shoutout. Will they mock each other? Will they speak in Corganisms? Will Craig serenade Fritz? The answer to all of the aforementioned (adorementioned?) questions is… YOW.

Kym Miller and Craig Smith discuss discovering Prince, the pieces of his discography that they prefer, and then count down their respective top ten Prince deep cuts and see if there are any points where their faves intersect.
DOWNLOAD HERE (right click to save)